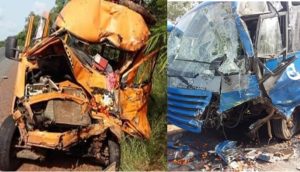 A road accident has claimed 3 lives in the early hours of Wednesday, 16th October 2019.

A 22 – passenger vehicle coming from Basse area collided with a GTSC bus coming from the Kombo end.

According to an eyewitness, the incident occurred in the morning when the van driver was over speeding to overtake a GTSC bus not knowing there was another GTSC bus approaching on the other lane.

3 died instantly including the 32–year–old van driver Alieu Manneh (who sustained severe head injuries) and a 5–year–old girl. The third is an elderly man. Sources also say 16 others have sustained injuries, some of them severe.

This reporter visited RVTH hospital where he saw the dead and survivors who were receiving treatment there.

The police PRO confirmed the three deaths. The police spokesperson narrated the same story as eye witnesses, saying that the van driver was trying to overtake a GTSC bus and in the process, the accident happened. He enjoined drivers to drive carefully to ensure the safety of their passengers.