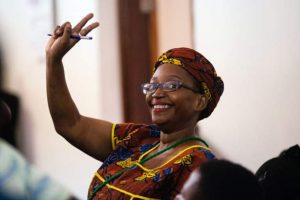 Ugandan academic and activist Stella Nyanzi, who was earlier acquitted of insulting the president, fainted after a scuffle ensued between her supporters and police officers.

Ms Nyanzi, who was ordered to be released immediately by a judge on Thursday, fainted after the trouble between her supporters and prison officials who tried to take her back into prison, according to Reuters news agency.

Officials attempted to wrestle Ms Nyanzi from her supporters but they managed to help her outside the court compound, put her in a car and drive off.

It quotes a supporter blaming the chaos on security officers:

“We were simply jubilating and we knew that this was court ground, we needed to move further… the police officers, they are the ones who brought in all this chaos,” Flavia Kalule is quoted as saying.

“It’s not surprising because that is how the mafia state operates,” she added.

Ms Nyanzi, who blew kisses and flashed the middle finger immediately after the judge’s verdict, had questioned the real reasons for her arrest before she fainted:

“Why was I in prison, because I wrote a poem? Because I expressed my deep disinterest and disgust of the NRM (National Resistance Movement) regime?” she asked.

She was convicted over a September 2018 Facebook post in which she referred to the president’s mother’s private parts.