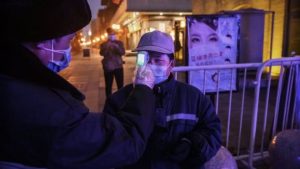 Some 242 deaths from the new coronavirus were recorded in the Chinese province of Hubei on Wednesday – the deadliest day of the outbreak.

There was also a huge increase in the number of cases, with 14,840 people diagnosed with the virus.

Hubei has started using a broader definition to diagnose people – which accounts for most of the rise in cases.

Until Wednesday’s increases, the number of people diagnosed in Hubei – where the outbreak emerged – was stabilising.

But the new cases and deaths in the province have pushed the national death toll above 1,350 – with almost 60,000 infections in total.

China has been accused of suppressing the full extent of the outbreak in the past, says the BBC’s Nick Beake in Hong Kong.

Professor David Heymann, Professor of Infectious Disease Epidemiology from the London School of Hygiene and Tropical Medicine, said: “What has happened in China is that they have changed the definition of what the disease really is – now they are taking people who have lesser symptoms.

Meanwhile, the Communist Party secretary in Hubei, Jiang Chaoliang, has been replaced by the Shanghai party chief, Ying Yong, according to state media. The party chief of the capital city, Wuhan, has also been relieved of his duties.

It is the first major change of Hubei party officials since the outbreak began.

Earlier this week, a number of health officials were “removed” from their jobs.

What is the new diagnosis method?

The province – which accounts for more than 80% of overall Chinese infections – now includes “clinically diagnosed cases” in the number of confirmed cases.

This means it includes those showing symptoms, and having a CT scan showing an infected lung, rather than relying only on the standard nucleic acid tests.

Of the 242 new deaths in Wuhan, 135 are such “clinically diagnosed” cases.

That means, even without the new definition, the number of deaths in Hubei on Wednesday was 107 – a new high for the province.

Posted in Featured News | Comments Off on Coronavirus: Sharp increase in deaths and cases in Hubei
Tags: Coronavirus update