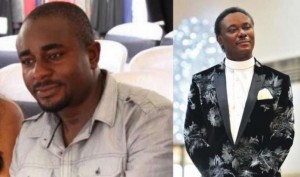 The Nollywood actor, Emeka Ike, has accused the founder and head pastor of Household of God Church, Pastor Chris Okotie, of being behind the plot to destroy his marriage at all cost. Emeka Ike, in a statement, said he was crying out because of the “desperate desperation” of Okotie to destroy his home.

The feud between the actor and his wife, Suzanne, had degenerated almost beyond resolution, with the wife filing a divorce suit before a Customary Court in Lagos.

Emeka Ike said he was compelled to alert the whole world of the “devil” behind the plot to destroy his home, after all efforts to beg his wife to drop the divorce bid failed.

The actor accused Okotie of hiring a Senior Advocate of Nigeria (SAN) for his wife just for the purpose of destroying his home.
He alleged that Okotie gave his wife about N500, 000 for her mother’s burial and also bought her a blackberry passport phone.
Emeke Ike further said every Sunday, Okotie would call his wife out in church with other single women and ask that gifts should be given to them.

He further alleged that Okotie with another man in the church helped his wife to secure a job without his consent.
The man in question, Emeka Ike alleged, recently had issues in his marriage over a love message which Suzanne sent to him.

According to the statement, Emeka Ike said:

“I want people to look into this issue critically. I’ve never beaten this woman in my life. When she ran out of home, I called my pastor and they took us for counselling. For one week, I was begging her every day; I would go home alone and she would go home alone as well.
“At a point, pastor asked us to write five things we like and dislike about each other. The pastor said that maybe we could work it out. I wrote mine, she wrote hers and she never said there that I used to beat her. I still have that document with me. She gave me what she wrote and I gave her what I wrote. If I used to beat her, she could not have left it out from that then. Any man that beats a woman is a coward. I know that someone somewhere must have done something to her. How can I beat a woman I adore so much? I love my family and this is very unfortunate. Her children have been begging her to come home, and she has refused.
“I am pretty sure my wife is acting confused; she is acting as if she is under a spell, which is psychological and then she is acting under blackmail.
“There was a time I accused her of bringing men to my house. I mean, which woman will wake her husband up in the middle of the night and said to him, share your property I want to get my share now from what you have? Tell me, which woman will do that if not acting under a spell?
“There was a time I travelled and she closed down my school and sent all the students away. So, there is a lot to it, other than the allegation of battery against me and I want the whole world to know. My name is precious to me and I don’t want anything to drag it in the mud.
“Pastor Chris Okotie just absolved my wife into his church without making any effort to get in touch with me. If as a pastor, your church member is having issue with her husband, and you failed to do anything to resolve it, what kind of pastor are you? When I called him, he refused to pick my call. He also failed to react to a text message I sent to him. Is that a man of God? Even, if you have a police case, they will make effort to hear from you before taking a position, not to talk of the church.

“When we went to court, I told my wife that I’m interested in amicable settlement of the matter, and that I still want her back. But she refused. Even, if you don’t want me, what of your children, I asked her and she still would not listen to me. I want the whole world to know because there is a lot of misinformation out there. The lawyer which Okotie hired for my wife is also frustrating every attempt I make to resolve the matter peacefully,” he narrated.

Posted in Entertainments, Featured News | Comments Off on Emeka Ike Accuses Pastor Chris Okotie Of Being The Devil Behind Plot To Destroy His Marriage
Tags: Nollywood