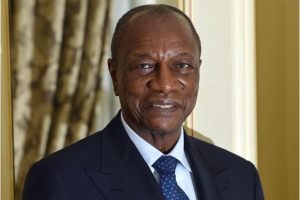 Guinea’s President Alpha Condé has refused to meet a delegation of West African leaders as the country heads towards a referendum that could allow him run for a third term, reports Radio France Internationale (RFI)

A delegation of heads of states from the regional bloc, the Economic Community of West African States (Ecowas), was scheduled to visit Guinea on Friday, RFI reports quoting high-ranking sources.

It was to be led by Niger President Mahamadou Issoufou and was to include Nigeria’s Muhammadu Buhari, Ghana’s Nana Akufo-Addo and Burkina Faso’s Roch Marc Christian Kaboré.

Guinea has been plunged into political crisis over President Condé’s push for constitutional reforms through a referendum that will be held on 1 March. The opposition has said it will boycott the vote.

Opponents see the process as a plot to enable the 81-year-old leader, who is nearing the end of the two terms allotted under the present constitution, to stay in power for up to another decade.