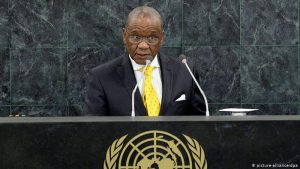 In a televised speech in the capital, Maseru, the 80-year old said the decision has been the hardest he’s made in his career.

“Today I wish to reiterate my announcement to retire from office. I might still have the necessary zeal and fervor to continue serving my people and country, but the truth is that at my age I have lost most of my energy. I’m not as energetic as I use to be a few years ago”, he said.

I appeal to all Basotho not to intentionally misconstrue my announcement to retire from office.

While there’s speculation that his resignation follows mounting pressure over his former and late wife, Thabane attributes his decision to the lack of eenrgy.

“My fellow countrymen and women it is very unfortunate that some have deliberately decided to distort my decision to retire either motivated by hate or for political gain. I appeal to all Basotho not to intentionally misconstrue my announcement to retire from office”, Thabane added.

The Prime Minister is expected to be charged with the murder of 58-year old Lilopelo Thabane, who was murdered in June 2017 by unknown assailants.

The 48 year old is also facing trial over the murder. She returns to court on March 17.