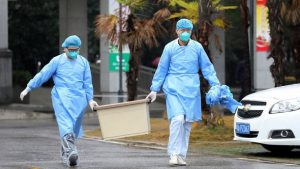 The patient is a Moroccan man living in Italy, the Reuters news agency reports, and he is receiving treatment at a hospital in Casablanca.

His health condition is not critical, the ministry is quoted as saying in a statement.

The case was confirmed after tests at the Institut Pasteur-Maroc returned positive, according to the state-owned Maghreb Agency Press.

News of Morocco’s first patient on Monday coincides with similar confirmations in Tunisia and Senegal.

Tunisia’s Health Minister Abdelatif el-Maki told journalists on Monday that their patient was a 40-year-old Tunisian man, who arrived in the country by boat from Italy on 27 February.

In Senegal, Health Minister Abdoulaye Diouf Sarr told a press conference that the patient is a Frenchman who lives in Senegal and flew back from France on 26 February.