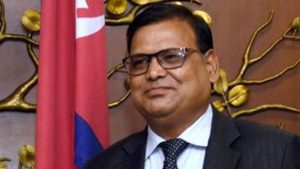 A woman has accused Krishna Bahadur Mahara of assaulting her while drunk at her apartment last month.

Former speaker of Nepal Parliament was arrested yesterday sunday after a female employee in the assembly accused him of rape.

A police van arrived at Krishna Bahadur Mahara’s residence late on Sunday and took him into custody after the district court ordered his arrest.

Mahara, a senior member of the ruling Nepal Communist Party and former Maoist rebel, denied the allegation but stepped down as speaker last week after the woman gave details of the assault to the media.

The communist government had faced mounting pressure over the case.

In a video interview published by hamrakura.com news website last month, the woman said Mahara was drunk when he arrived at her home on September 29.

“I had not thought it would come to this. He forced himself [on me]… he left after I said I will call the police,” she said in the interview.

The woman showed apparent bruises on her arms, hands and feet.

Police said they went to her home the same night but she did not file a case straight away.

Investigators collected evidence including a bottle of whisky and a pair of broken spectacles, allegedly belonging to Mahara, police said.

However, the woman withdrew her allegations mid-week, following threats and pressure, media reports said. She eventually filed a formal complaint on Friday.

On Friday, the United Nations and foreign embassies in Nepal issued a joint statement urging the government to act against gender-based violence, without specific reference to Mahara.

“The undersigned call upon all relevant state authorities to send a clear message of zero tolerance to any forms of gender-based violence by anyone under any circumstances,” the statement read.