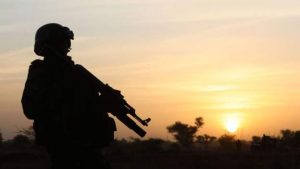 A formal investigation has been launched in Nigeria after a solider shot dead four colleagues on Wednesday before taking his own life, the army says.

Two other soldiers were injured in the incident at a military base in Borno state and were taken to a military hospital in Maiduguri for treatment, army spokesman Sagir Musa added.

Borno state is one of the areas worst affected by the decade-long insurgency waged by Islamist insurgents in north-eastern Nigeria.