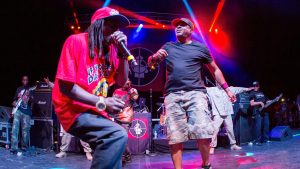 The dismissal came two days after the rapper sent a cease-and-desist letter to Bernie Sanders’ campaign after his bandmates said they’d appear at one of his rallies in Los Angeles.

“Public Enemy and Public Enemy Radio will be moving forward without Flavor Flav,” said the group in a statement.

“We thank him for his years of service and wish him well.”

“If there was a $bag, Flav would’ve been there front & centre,” he wrote on Twitter. “He will NOT do free benefit shows.”

Their split comes just a month after the band was honoured with a lifetime achievement award at the Grammys.

Their early albums radically changed the sound of hip-hop, with a sound that was politically and musically uncompromising.

But tensions have been rising since 2017, when Flavor Flav – real name William Drayton – sued his bandmates and the group’s managers over unpaid profits.

The case had been dismissed before last week’s stand-off over Sanders’ rally.

Flavor Flav’s cease-and-desist letter accused the campaign of using his “unauthorised likeness, image and trademarked clock in promotional materials” for a Los Angeles rally, even though the rapper “has not endorsed any political candidate”.

“While Chuck is certainly free to express his political view as he sees fit – his voice alone does not speak for Public Enemy,” the letter continued.

Chuck D mocked the star’s statement, saying his former bandmate didn’t “know the difference between Barry Sanders or Bernie Sanders”, and was simply unprepared to play for free.

He said Flavor had previously refused to play a fundraiser for Harry Belafonte’s human rights charity Sankofa in 2016, calling the star “ungrateful” – especially as Belafonte had inducted Public Enemy to the Rock And Roll Hall Of Fame in 2013.

“I would not have Public Enemy without Flavor,” he concluded. “However, I will park it in the driveway, take off the plates [and] wait to re-register it when it’s running right.”

A lawyer for Chuck D added in a statement to Rolling Stone magazine: “From a legal standpoint, Chuck could perform as Public Enemy if he ever wanted to; he is the sole owner of the Public Enemy trademark.

“He originally drew the logo himself in the mid-80s, is also the creative visionary and the group’s primary songwriter, having written Flavor’s most memorable lines.”

Shortly after announcing Flavor’s dismissal, Public Enemy Radio – an offshoot of the main group, featuring Chuck D, DJ Lord, Jahi and the S1Ws – went ahead with their performance at senator Sanders’ rally, performing classics like Fight the Power, Bring the Noise and Shut ‘Em Down.

During the set, which was livestreamed online, Chuck D urged people to register to vote in the upcoming US Presidential election.

“Voting is [as] important as washing your ass in the morning,” he declared.