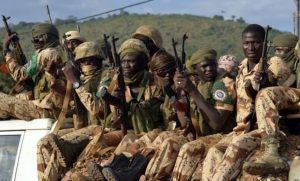 At least 23 militiamen were killed Saturday in fighting in Central African Republic between rival groups who signed a peace deal in February, said the UN mission in the country MINUSCA.

Fierce clashes between militias in recent months has raised concerns about whether the peace accord aimed at ending years of violence in CAR will hold.

The country’s president, Faustin-Archange Touadera, this month told AFP that the agreement was “quite strong” — but MINUSCA on Saturday said fighting had broken out in Birao, a city close to the Sudanese border.

The clashes were between the Popular Front for the Renaissance of the Central African Republic (FPRC) and the Movement of Central African Freedom Fighters for Justice (MLCJ).

The rival militias also fought in the city earlier this month.

“The situation remains tense but there is no more fighting,” MINUSCA spokesman Vladimir Monteiro said.

“A MINUSCA Blue Helmet was also slightly wounded,” he added, without specifying the nationality.

A Zambian contingent of the multinational force is stationed in the area.

The peace accord with 14 militias vying for control of the country’s gold, diamond and other resources came after years of conflict following the ousting of Touadera’s predecessor Francois Bozize in 2013.

Thousands of people have been killed and about a fifth of the 4.5 million population has been displaced in the last six years.

Touadera has been struggling to prove he can convince the militias, which collectively control more than three-quarters of the territory, to lay down their arms.