Weather: Parts of UK could see a month's rain in 24 hours amid floods

Weather: Parts of UK could see a month’s rain in 24 hours amid floods 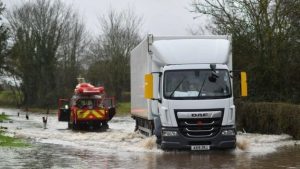 Deluged communities in parts of the UK are facing more heavy rain as they struggle to cope in the wake of Storm Dennis.

A month’s worth of rain in 24 hours could also hit north Wales and north-west England, forecasters said, falling on ground that is already saturated.

Nearly 120 flood warnings remain in place across the country.

And there is also travel disruption after floods blocked a major rail route between England and Scotland.

The Environment Agency said there was a “heightened flood risk” across the Midlands, with six severe warnings – meaning there is a danger to life – still in place near the Welsh border around the Rivers Lugg, Severn and Wye.

There are also three yellow severe weather warnings in place across parts of north-west England and Wales as clean-up operations continue following flooding in the wake of Storm Dennis.

Rain fell heavily overnight into Thursday, with Met Office forecasters warning it was likely to continue until about 15:00 GMT in parts of the UK.

Hundreds of people have been evacuated from their homes due to floods, with the worst-affected areas including south Wales, Herefordshire, Worcestershire and Shropshire.

Labour leader Jeremy Corbyn said he was showing his “true colours by his absence”, adding that the prime minister was sending a “clear message” by not convening the government’s emergency committee, Cobra.

Fire Brigades Union general secretary Matt Wrack said his union had been raising the issue of long-term planning to deal with extreme weather events for years, but had found the government’s response to be “lacklustre”.

On Wednesday, business minister Nadhim Zahawi told Sky News the prime minister was focused on getting “money out the door” to businesses and local authorities in affected communities.

“He wants to help people by getting funding to them,” Mr Zahawi said.

Posted in Featured News | Comments Off on Weather: Parts of UK could see a month’s rain in 24 hours amid floods
Tags: UK News