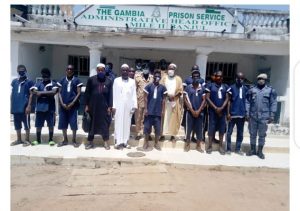 Afrinity Production disclose the release of not less than 12 convicted prisoners who were unable to pay their court fines on Tuesday after the Gambia Supreme Islamic Council (GSIC) chipped in and deposited their respective fines amounting to more than D50, 000.

According to Points, they were convicted of various crimes ranging from stealing, threatening violence, conspiracy to obtain money by false pretence among others. The 12 prisoners comprise 10 Gambians and two Senegalese.

The GSIC also gave the released prisoners transport refunds to return to their various homes, within and outside the country with a view to reuniting with their families and loved ones again. Some of these prisoners were convicted between one month to two years in prison.