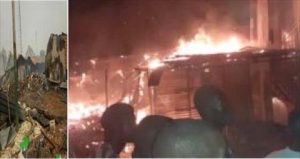 Police in Basse in the Upper River Region have arrested seven people for looting during the Basse Market inferno on Monday which officials say destroyed over 300 stalls within the market.

The cause of the fire incident at the time of going to press is yet to be established.

The leader of The Gambia Democratic Congress (GDC), Mama Kandeh has extended benevolence in the sum of D200,000 to the victims of the fire incidents.

Meanwhile, officials of the NDMA in URR, Basse Red Cross and staff of the Basse Area Council were conducting a rapid assessment with a view to establishing the scale of damage caused by the inferno.

The blaze was reported to have started around 6 p.m. Monday evening, when most of the market vendors were about to close.

The chairman of BSAC, Foday Danjo, described the inferno as ‘unbelievable’ and ‘shocking,’ saying that the council is planning at the moment to temporarily relocate the market to Koba Kunda, a surburb of Basse.

Quizzed as to the cause of the fire outbreak, the Chairman said according to some eyewitness, the cause of the inferno was the result of electricity spark. “The fire incident started from one stall within the market. The market vendors tried to control it internally but it eventually spins out of control and went on to consume over 300 stalls.”

The council, he went on, is launching an appeal from the central government, NGOs, philanthropist and individuals among others to come to the aid of the affected businessmen and women.

“Some affected individuals were entirely depending on some of these things that they sell in the market.”

Posted in Featured News | Comments Off on 300 stalls perish in Basse Market inferno, 7 arrested for looting