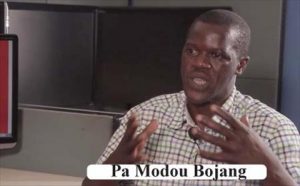 Pa Modou Bojang, manager of Home Digital FM which was recently closed by government has expressed disappointment over the closure of the two radio stations: Home Digital and King FM without following due process or giving any reason.

Mr. Bojang was speaking in an interview with reporters on Tuesday shortly after the government announced its decision for the reopening of the two radio stations and subsequently dropping all charges against their managers and staff who were arrested and briefly detained last month.

This decision came following the Gambia Press Union’s (GPU) and the National Human Rights Commission’s (NHRC) collaborated efforts that led to a fruitful discussion for reopen on Tuesday.

“I am very disappointed with the minister of Information and Communication and The Gambia government at large for closing and reopening of our radio stations without giving any reason. We were expecting that the government will come up with a reason for shutting down our radio stations,” said Pa Modou Bojang.

According to him, he never had doubts about the reopening of two radio stations because they had done nothing wrong.

“The only thing I will emphasise is my disappointment with the minister of Information and The Gambia government in general because due process was not followed for the closing down of the radio stations.