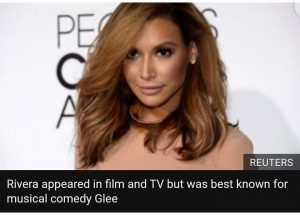 Glee star Naya Rivera is known to have drowned in a “tragic accident” while boating with her young son on a lake in California, police say.

The 33-year-old was reported missing on Wednesday afternoon when her boat was seen drifting at Lake Piru, north-west of Los Angeles.

Her son, 4, was found asleep on board. He told police they went swimming but his mother never comes back.

Search teams are hunting for her body but conditions are difficult.

Rivera is best known for playing cheerleader Santana Lopez in Glee, the hugely popular musical comedy TV series that ran on the Fox network from 2009 to 2015.

After a massive search and rescue operation found no trace of Rivera police moved to a “search and recovery operation”.

Visibility in the lake is low and police also warned it could take weeks to find a body, if it can be found at all.