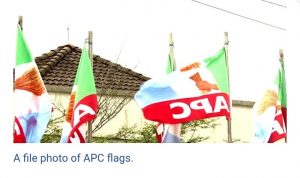 Afrinity Production is pleased to disport to you that, the national leadership of the All Progressives Congress (APC) in Nigeria has resolved the lingering leadership tension in the Cross River State chapter of the party.

The meeting according to Channels TV, was held on Tuesday at the party’s National Secretariat in Abuja, held at the instance of the Chairman of the Caretaker Committee and Yobe State Governor, Mai Mala Buni.

He noted that deliberations at the meeting centred on the leadership of the party in Cross River State, where the two factions led by Etim John and John Ochalla respectively, were in contention.

Senator Akpanudoedehe, after hearing presentations from parties, stressed the need for those present to come to an amicable resolution.

He explained that it was important for members to unite together to prepare the APC for the fast-approaching elections in Cross River.

At the end of deliberations, Senator Matthew Mbu was unanimously mandated to assume the office of the Cross River State Chairman of the Party.

“Commendably, the two factional chairmen have expressed relief at having been able to sink their differences in the interest of moving the party forward in the state,” the statement said.