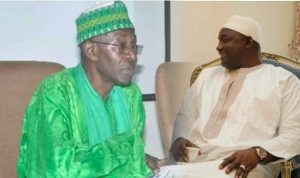 The leader of the opposition Alliance for Patriotic Reorientation and Construction has forewarn that the preceding ruling party will be left with no other alternative but to take the government to court if they act up in their final attempt to get back the party and preceding President Yahya Jammeh’s seized assets.

“We are preparing a petition to government, UN, Ecowas, EU, AU, embassies, human rights commission and all the relevant institutions as our final attempt to regain our assets. We will demand that they push government to react to this situation or else we will be forced to take legal actions,” Fabakary Tombong Jatta told The Standard.
He said the final petition, which will contain all the party’s claims and demands will also be shared with the Gambia Press Union for onward delivery to all the country’s media houses for the purposes of transparency and accountability.

“We have had plans to resort to court for a long time but you know court fees are so expensive and sometimes it becomes a challenge for the weak to have justice even if you are right. However, if our final attempt fails to attract government’s attention, we will be left with no option but to take them to court. We want to give our courts a trial but if we don’t have justice, we will go to the Ecowas court to seek justice,” he said.

The former majority leader said he is unable to understand how the Barrow government could within the bound of 3 months give brand new pickups to each political leader in the Coalition and donate 57 more to the National Assembly and still claims that the APRC government that ruled for 22years could not justly provide just 5 pick-ups.

“I think it is too much. As I said we are making our last attempt about that. We will demand that they tell Gambians who they sold the party and Jammeh’s properties to and how much they were sold because there are rumours that some of Jammeh’s vehicles and bulls were sold to former and current ministers and senior government officials at giveaway prices. That’s the height of dishonesty one could expect from a government,” he said.

Posted in Featured News | Comments Off on APRC Frightens To Take Legal actions against Gov’t Over Seized Assets
Tags: APRC and President Barrow