Black man dies after US police press him to ground 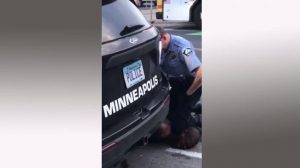 A Black man who yelled “I cannot breathe” as a white Minneapolis police officer pressed him hard down with his knee in the US state of Minnesota died late on Monday, police reported, putting forward the unjust from community members and leaders, and leading to the officers’ discontinuance.

Video of the occurrence shows the police officer pressing down George Floyd, believed to be in his 40s, to the pavement with his knee on the man’s neck for several minutes.

Floyd was known by prominent civil rights lawyer Ben Crump, who said he had been keep back by the Floyd family.

Floyd can be heard saying in the leaked video: “Please, please, I cannot breathe.”

The officer tells Floyd to “relax”.

Floyd responds: “I can’t breathe. Please, the knee in my neck.”

*The officer continues to hold down Floyd with his knee for several minutes, with Floyd pleading and asking for water.*

“My stomach hurts. My neck hurts. Please, please. I can’t breathe,” Floyd cries out, while moaning and trying to cough.

Those who were watching the occurrence unfold can be heard begging police to move off Floyd.

It is not clear what happened before and after the video was taken from the incident.

The city’s mayor, Jacob Frey, confirmed that the officers had been terminated, saying “this is the right decision for our city”.

Many are still complaining about black life and how they been maltreated all in the name of racism.