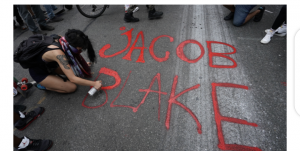 Afrinity Production make know to you the killing of black man Jacob Blake, he was tie to his hospital bed even though he is paralyzed after US police shot him repeatedly in the back, his father said Friday.

“Why do they have that cold steel on my son’s ankle?” Blake Sr., who visited his son in the hospital Wednesday, said in an interview on CNN.

African American Blake, who was 29at the time of his death , was shot over the weekend by a white police officer in Kenosha, Wisconsin and has no movement from the waist down.

The latest shooting of a black man by a white officer has triggered a new national uproar over police violence against people of color in America.

“This is an insult to injury,” said Justin Blake, an uncle of the younger Blake. “He is paralyzed and can’t walk and they have him cuffed to the bed. Why?”

Blake Sr. said his son told him he can feel pain in his legs but that he himself is not sure if the pain is actually coming from his legs.

Wisconsin Governor Tony Evers said he was baffled as to why Blake is tied to his bed.

“I would have no personal understanding why that would be necessary,” Evers told reporters Thursday.

“I would hope that we would be able to find a more, a better way to help him … in recovering. That seems counterintuitive. It seems to be bad medicine.”