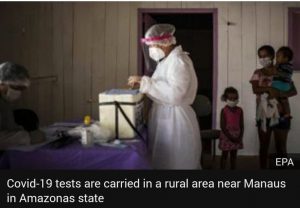 The toll of coronavirus deaths in Brazil has risen by nearly 1,000 in a day, making the country’s General death toll becomes the world’s fourth highest.

Its figure of 28,834 has now exceeded France, and only the US, the UK and Italy have recorded more deaths.

President Jair Bolsonaro has undeviating played down the pandemic, although the country has the world’s second-highest toll of cases.

He has criticised state lockdowns for harming Brazil’s economy and jobs.

This puts it past France’s total of 28,774. Even if new figures raised the French total back above Brazil, the trends in the two countries show deaths in the Latin American nation are on a far steeper upward trend.

As per count by Johns Hopkins University, Brazil now has 498,440 confirmed cases.

Only the US surpassed all, with 1.77 million.