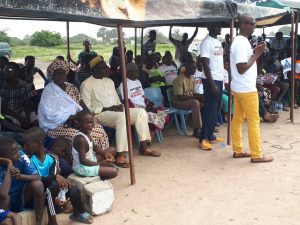 Hundreds of youth from diverse settlements surrounding Brufut on Saturday October 19th held a solidarity march pass to demand land they claim to be theirs.

The procession started from the community Primary School to the Strasser field, with protesters wearing T-shirts bearing the phrase: ‘‘Brufut Multipurpose Centre Strasser Field Is Not For Sale. We Stand for our Future Generation.’’ Brufut like many communities in the Western Region does not have land designated for youth or garages, markets, and other purposes.

The Youth of Brufut complained that the current ground they use as a football field is owned by the Brufut Primary School which is just near the health centre; that the Primary School and Health Center authorities complain that their students and patients are usually disturbed by the noise.

Abass Manneh, the Chairperson of Brufut Recovery Community (BRC) said the solidarity march is held to show the people of Brufut, Government and all those who care about youth, their concerns and determination towards demanding for their land.

“Brufut will not be the only place to benefit from this, but the entire country,” Manneh said.
Lamin Basse Bojang Chairperson of the Brufut Sports Community (BSC) said the march pass is to show the world that Brufut does not have a place to showcase their talents or stage activities.

“The plans we have for this place is not only for football, but for many other activities,” he said.

Mariama Saine of Brufut also posed a question to Government about their land which she said the youth are not asking for too much; that Government has taken all their land; that the only land they have their eyes on will not be taken from them.

According to the recommendations of the ‘Janneh’ Commission, all community lands should be returned to them. One of these lands includes the ‘Strasser’ Field that the youth designate to be a multipurpose centre of Brufut. They indicated that some of the village elders including the Alkalo, want to deprive them of their right to use the land which they will never accept.