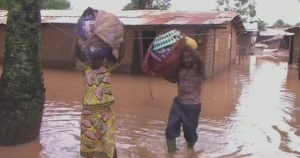 Thousands more people are without homes after two days of rain and severe flooding in the Central African Republic.

On Sunday, the government said more than 20,000 people have been made homeless across its provinces and additional 8,000 in the capital, Bangui.

A coordinator for one of the makeshift camps set up for residents displaced by the floods in Bangui is concerned that more homes were likely to fall.

To see something that you spent years building collapse, that is hard, I feel sad.

“Really, we need assistance. Some homes were destroyed, families are outside their homes. It is hard when you leave your house, unexpectedly. To see something that you spent years building collapse, that is hard, I feel sad”, Rock Lionnel Koigningbo said.

The situation has worsened following the overflow of the Oubangi river, located in the southwest of the capital. The State is appealing for international support.

Firmin Ngrebada is Prime Minister for the Central African Republic.

“The government is working hard since the start of this catastrophe to help our compatriots who are in distress, but in view of the scale of the disaster and in particular the difficult situation the country finds itself in, the government. I with the authority of the President of the republic and Head of State, accordingly declare a national catastrophe and we are appealing for national and international solidarity”, Ngrebada said.

According to authorities, heavy rains in recent weeks have caused an unusual increase in the rising levels of the Oubangi river.

Is the IEC financially independent to carry out its work? (Previous Post)
(Next Post) Robert Evans, ‘Chinatown’ and ‘Godfather’ producer, dead at 89
Previous Image