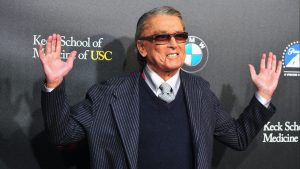 Robert Evans, whose charisma rivaled some of the actors who appeared in the hit films he produced, died Saturday, according to his publicist Monique Evans.

He was 89.
As a studio head, Evans helped resurrect Paramount Pictures in the 1960s and 1970s by bringing such projects as “Chinatown,” “The Godfather” and “Rosemary’s Baby” to the big screen.
Evans seemed to epitomize Hollywood excesses with his seven marriages, outspoken nature and freewheeling lifestyle that he documented in his 1994 memoir, “The Kid Stays in the Picture.” (The book was developed into a 2002 documentary film.)
“There are three sides to every story: my side, your side, and the truth. And no one is lying,” Evans once famously said. “Memories shared serve each one differently.”
Born in New York City to a dentist and his wife, Evans was a child actor on radio and in the early years of television.
When stardom eluded him, Evans took a job promoting sales for Evan-Picone, a clothing company co-owned by his brother, Charles.
He was working that gig when actress Norma Shearer spotted the good-looking Evans at the Beverly Hills Hotel pool.
She successfully lobbied for Evans to portray her late husband, MGM producer Irving Thalberg, in “Man of a Thousand Faces,” a 1957 film about Lon Chaney.
He also caught the eye of producer Darryl F. Zanuck, who cast the young actor as the matador Pedro Romero in “The Sun Also Rises,” based on the classic Ernest Hemingway novel.
Evans wrote in his memoir that Hemingway and the cast’s attempt to get him thrown off the picture led to the line he used to title his biography after producer Zanuck declared, “The kid stays in the picture.”
A few unsatisfying and unsatisfactory supporting roles would end his acting career and Evans turned to producing.
In 1976, he told The New York Times that his time as an actor led to him being the butt of many jokes when he first went to work for Paramount in 1966.
“People said, ‘That B‐actor is suddenly becoming an executive,'” Evens told the publication. “When I came into Paramount, they thought I’d last six months.”
Instead, he went on to turn the studio around thanks to his deft hand at acquiring and producing hits.
One film he produced, “Love Story,” starred Ali MacGraw, one of his seven wives.
Evans was also married to actress Sharon Hugueny, actress Camilla Sparv, former Miss America Phyllis George, former Versace model Leslie Ann Woodward, “Dynasty” actress Catherine Oxenberg and socialite Victoria White O’Gara.
But his greatest love may have been the movies.
He served as production chief at Paramount for eight years.
Evans told The New York Times he “was a bad executive” partially because he “would get very involved with just a few pictures, and I let a lot of other things pass.”
“I was lucky, because at least the pictures that I got involved with ended up being successful. But I realized in the last couple of years that my interest was not in sitting down with agents or packagers all day and making deals,” Evans said. “I wanted to be in the cutting room, working on the scoring; I wanted to be more fully involved with the making of the film.”
He did just that as an independent producer, working on films including “Marathon Man,” “Urban Cowboy” and “The Cotton Club.”
That last film found Evans embroiled in a scandal due to the murder-for-hire killing of a theatrical producer who had been involved with “The Cotton Club” project, Roy Radin.
Evans’ tumultuous life also included pleading guilty to cocaine possession in 1980, after his brother and another man were arrested in a scheme that involved buying $19,000 of cocaine from a federal narcotics agent posing as a dealer.
He described himself as a “hermit” in a 2017 interview with Vanity Fair, preferring to live quietly in a property once owned by Greta Garbo.
Evans also recalled with horror a 2013 fire that destroyed his projection room containing many of his precious Hollywood memories.
“I’d give the rest of the house to have it back,” he said. “It’s awful. Every director, writer, producer, young actor — I’d get together with them here five times a week to see movies. It was a very sad day. It’s one of the worst things that’s ever happened to me.”