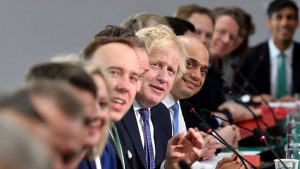 The PM will make a number of changes over the next 24 hours although it is unclear how wide-ranging they will be.

Attorney General Geoffrey Cox said he would be “uncomplaining” if, as some expect, he is sacked or moved.

Defence Secretary Ben Wallace told the BBC reshuffles were often “brutal”, but he was hopeful of staying in post.

Health Secretary Matt Hancock joked at an event in London: “It’s a huge pleasure to be here, and with a government reshuffle in the offing, it’s a great time to be talking about longevity.”

A Downing Street source told the BBC the PM would “reward those MPs who have worked hard to deliver on this government’s priorities to level up the whole country and deliver the change people voted for last year”.

Most of the cabinet have only been in their current jobs for just over six months, having been appointed when Boris Johnson became prime minister in July.

The PM left his cabinet largely untouched following his party’s decisive election victory in December, pending what sources suggested at the time would be a more significant overhaul after the UK left the EU on 31 January.

Senior figures such as Chancellor Sajid Javid, Foreign Secretary Dominic Raab and Home Secretary Priti Patel are not expected to be moved, but others are considered more vulnerable.

Mr Johnson is expected to make changes at junior ministerial level – namely parliamentary under-secretaries of state – that could see a 50/50 gender balance in a push to promote female talent.

There is also a plan to make at least 60% of parliamentary private secretaries women by the summer – compared with just 18% at the moment.

A reshuffle is a time of high anxiety for Cabinet ministers, who have been told to cancel all engagements so they are available to take a call from the PM.

One told me that they’re all paranoid, but desperately pretending not to be.

After the election, there were well-briefed reports that there would be a reorganisation of Whitehall departments and a Cabinet cull.

But it’s just seven months since Boris Johnson took over from Theresa May and got rid of most of her ministers. The speculation now is of a more limited reshuffle.

All eyes will be on Michael Gove who has been tipped to be the minister to oversee Brexit trade talks.

As for who could be on the way out, the names that crop up most among ministers are Andrea Leadsom and Theresa Villiers, but Downing Street will be mindful of gender balance in the top team.

A modest reshuffle would also encourage Conservative MPs to stay loyal, in the hope of promotion further down the line.

There are expected to be promotions for a number of female MPs in government, including Anne-Marie Trevelyan, Suella Braverman and Gillian Keegan.

Oliver Dowden and Alok Sharma are also expected to get more prominent roles.

A No 10 source said: “The prime minister wants this reshuffle to set the foundations for government now and in the future, [and] to promote a generation of talent that will be promoted further in the coming years.”

But others in the current cabinet are in less secure positions.

Mr Wallace, one of those whose future is reportedly in doubt, said it was up to the prime minister who was in his top team.

“I’ve been in this game long enough to know that British cabinet reshuffles are brutal,” he told the BBC during a trip to Brussels, where he is attending a meeting of Nato defence ministers.

“I am keen to serve. I enjoy the job of defence secretary. I’m a veteran, I’m a northern MP, I was actually in the army. So I think all those hopefully qualify me, but who knows?”

Asked about his future during a talk at the Institute for Government think tank, Attorney General Mr Cox said it had been the “greatest honour” of his working life to serve the government as its chief law officer.

He said he would be “uncomplaining” whatever the outcome of the reshuffle.

“If you gave me the opportunity to continue, I would embrace it eagerly but equally if it is not to be, there will be other doorways that will open for me.”

When she was re-appointed as Culture Secretary in December, Nicky Morgan said she only expected to stay in the role for a couple of months, having stood down as an MP at the election and appointed a peer.

Among more junior ministers tipped for promotion include Victoria Atkins, Oliver Dowden, Kwasi Kwarteng and Lucy Frazer, while Stephen Barclay could make a quick return to cabinet after his role as Brexit Secretary was scrapped following the UK’s departure.

Mr Johnson is expected to appoint a new minister to oversee the building of the HS2 rail line, final approval for which was given this week.

He also needs to find someone to run the Cop 26 climate summit in Glasgow later this year after its previous president Claire Perry O’Neill was sacked, and two former Tory leaders David Cameron and Lord Hague rejected the job.