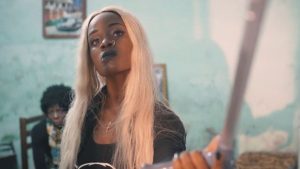 Olivier Assoua’s first feature film was shot on a shoestring budget in the small Cameroonian town where he was born. As he tells the BBC, the low cost ensured the movie got made – and this is why his long-held dream is set to be realised when it is released in the coming months.

When Olivier Assoau was 10, his civil-servant father bought a VHS player. His was the only family in the neighbourhood to own one.

“When we did well at school, my father allowed my friends and I to watch a movie as a reward. It motivated me to do well in school because I really wanted to watch movies,” Assoua says.

And thus, a lifelong passion began.

Years later, he returned to his birth town to embark on a film-making journey. He wrote, directed, shot and edited his first feature-length film, La Vallée des Aigles (“The Eagle’s Nest” is its English title).

“My film La Vallée des Aigles is about two female friends in a small town where many young people emigrate to bigger cities or Europe in search of a better life.

“In this film, the two main characters stumble upon a large sum of money. One of the friends decides to go to Europe with the money, whilst the other wants to stay in Cameroon and make something of herself.”

The plight of the Africans

“Many Africans are dying trying to get to Europe,” he says. “There is a belief that going to Europe will make their lives better.”

A 2019 UN migration study, seeking to understand the reasons for migration to Europe, interviewed close to 2,000 migrants from 39 African countries, and found that nearly all of them would make the same perilous journey again despite the danger.

Assoua believes many of problems in Africa can be traced back to the legacy of colonialism, which forced together different groups into the same country and skewed economic relationships, both internally and internationally.

“It will take time to heal and get out of the mindset of the colonised subject and rebuild [African countries],” Assoua says.

The stories one tells are important, he says.

“Part of that [the rebuilding] is also creating content that matters.”

The effects of colonialism and the aspiration to go to Europe are long-running themes in African cinema – for example in the acclaimed 1966 Senegalese film Black Girl, directed by Ousmane Sembène.

In the film, a Senegalese girl is hired as a nanny by a middle-class French couple. When the couple move back to France, they take the girl with them. At first, she is happy beyond belief – dreaming of Paris and of wearing stylish clothes and shoes.

Soon, however, the girl’s excitement turns to sorrow, as she realizes her reality in Paris is very different to what she had imaged – that she is mainly confined to the apartment, cooking and cleaning.

The film was a critical success. Critics saw the girl as a symbol for the newly-independent Senegal: a country dreaming of freedom and prosperity but one weighted down by the aftermath of colonialism.

Like the migrants risking their lives to reach the shores of Europe, Assoua suggests black Africans are abandoning “our own storytelling” and instead flocking to Western films. He calls for support for home-grown films on the continent, and says they should draw on each country’s rich history and culture instead.

“Instead of asking for a seat at the table, we need to build our own table,” he says.

Posted in Featured News | Comments Off on Cameroonian filmmaker: ‘Why I made a film for £5,000’