China takes a Win Grin over US demonstrations of Black killings 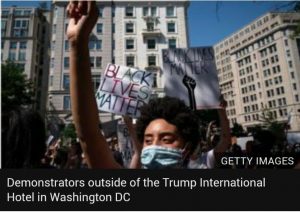 Chinese state broadcast media have given extensive coverage to the protests, not leaving out the chaotic scenes and alleged police brutality in America to claim that China enjoys greater social stability.

Speaking to an international audience, Chinese diplomats are attempting to portray Beijing as a responsible global leader, standing in solidarity with other countries in condemning the racial disparity and injustice in the US.

China’s state news agency Xinhua described the US civil unrest as “Pelosi’s beautiful landscape” – a reference to US House Speaker Nancy Pelosi’s comment last summer that the Hong Kong protests were “a beautiful sight to behold”.

Chinese and Hong Kong officials have also called out the US for applying “double standards” in its response to civil unrest.

“You know there are riots in the United States and we see how local governments reacted,” said Hong Kong’s leader Carrie Lam.

“And then in Hong Kong, when we had similar riots, we saw what position they adopted then.”

The officials’ view is shared by many Chinese social media users, who dub America “the double standard nation”.