Coronavirus: China and the virus that threatens everything

Coronavirus: China and the virus that threatens everything 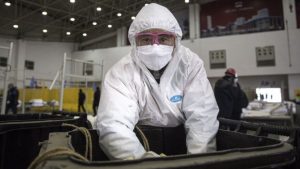 On a cold Beijing morning, on an uninspiring, urban stretch of the Tonghui river, a lone figure could be seen writing giant Chinese characters in the snow.

The message taking shape on the sloping concrete embankment was to a dead doctor.

“Goodbye Li Wenliang!” it read, with the author using their own body to make the imprint of that final exclamation mark.

Five weeks earlier, Dr Li had been punished by the police for trying to warn colleagues about the dangers of a strange new virus infecting patients in his hospital in the Chinese city of Wuhan.

Now he’d succumbed to the illness himself and pictures of that frozen tribute spread fast on the Chinese internet, capturing in physical form a deep moment of national shock and anger.

There’s still a great deal we don’t know about Covid-19, to give the disease caused by the virus its official name.

Before it took its final fatal leap across the species barrier to infect its first human, it is likely to have been lurking inside the biochemistry of an – as yet unidentified – animal.

That animal, probably infected after the virus made an earlier zoological jump from a bat, is thought to have been kept in a Wuhan market, where wildlife was traded illegally.

Beyond that, the scientists trying to map its deadly trajectory from origin to epidemic can say little more with any certainty.

But while they continue their urgent, vital work to determine the speed at which it spreads and the risks it poses, one thing is beyond doubt.

A month or so on from its discovery, Covid-19 has shaken Chinese society and politics to the core.

That tiny piece of genetic material, measured in ten-thousandths of a millimetre, has set in train a humanitarian and economic catastrophe counted in more than 1,000 Chinese lives and tens of billions of Chinese yuan.

It has closed off whole cities, placing an estimated 70 million residents in effective quarantine, shutting down transport links and restricting their ability to leave their homes.

And it has exposed the limits of a political system for which social control is the highest value, breaching the rigid layers of censorship with a tsunami of grief and rage.

The risk for the ruling elite is obvious from their response, ordering into action the military, the media and every level of government from the very top to the lowliest village committee.

The consequences are now entirely dependent on questions no one knows the answers to; can they pull off the complex task of bringing a runaway epidemic under control, and if so, how long might it take?

Across the world, people seem unsure how to respond to the small number of cases being detected in their own countries.

The public mood can swing between panic – driven by the pictures of medical workers in hazmat suits – to complacency, brought on by headlines that suggest the risk is no worse than flu.

The tiny proportion killed out of the many, many millions who catch it each year still numbers in the hundreds of thousands – individually tragic, collectively a major healthcare burden.

Very early estimates suggested the new virus may be at least as deadly as flu – precisely why so much effort is now going into stopping it becoming another global pandemic.

But one new estimate suggests it could prove even deadlier yet, killing as many as 1% of those who contract it.

For any individual, that risk is still relatively small, although it’s worth noting such estimates are averages – just like flu, the risks fall more heavily on the elderly and already infirm.

But China’s experience of this epidemic demonstrates two things.

Firstly, it offers a terrifying glimpse of the potential effect on a healthcare system when you scale up infections of this kind of virus across massive populations.

Two new hospitals have had to be built in Wuhan in a matter of days, with beds for 2,600 patients, and giant stadiums and hotels are being used as quarantine centres, for almost 10,000 more.

Despite these efforts, many have still struggled to find treatment, with reports of people dying at home, unregistered in the official figures.

Secondly, it highlights the importance of taking the task of containing outbreaks of new viruses extremely seriously.

The best approach, most experts agree, is one based on transparency and trust, with good public information and proportionate, timely government action.

But in an authoritarian system, with strict censorship and an emphasis on political stability above all else, transparency and trust are in short supply.

But those measures have become necessary only because its initial response looked like the very definition of complacency.

There’s ample evidence that the warning signs were missed by the authorities, and worse, ignored.

Posted in Featured News | Comments Off on Coronavirus: China and the virus that threatens everything
Tags: Coronavirus, Coronavirus update