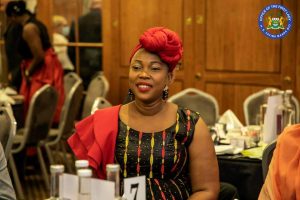 A UK based organization EBONY AMBASSADORS CIC UK has given special recognition award to the First Lady of Sierra Leone as the Woman and Girl-Child Champion .The presentation was made during an award ceremony held at the Ambassadors Bloomsburg Hotel
12 Upper Woburn Place in London on Saturday 31st July.

Miss Ebony whose activities bring communities together through Art, Culture, Skills Empowerment Workshops, said the award was in recognition of the hard work of the First Lady in supporting women and girl’s.

Receiving the award, the First Lady of the Republic of Sierra Leone Madam Fatima Maada Bio said she is humbled to be invited and above all receiving an award for the work she has been doing around women and girls is an honor but also to the many people that stood by her over the past years, she further that so much has been achieved and a lot more is required, because girl’s empowerment is not a one-person fight but a fight everyone should be involved.

First Lady ended up that the award was proof that people do listen and it’s blessing for her to front to champion one of the biggest campaigns in the continent that has also drawn the attention of the UN and AU and still breaking barriers. She said this fight has also led to the AU choosing her as a champion of sanitation in Africa.
She reminded the guest present that menstruation is also a very important issue affecting girls in Africa. We need to call on their leaders to prioritize Education. She urges people to use their different platforms to help spread the message to help change the lives of our children in Africa.

The CEO of Ebony Ambassador UK said that the establishment of the “Hands off Our Girls” initiative, which has given hope and courage to the Sierra Leonean girls, and interest-free micro-credit to women, as well as skills acquisition programs, where over thousands of women have directly and indirectly benefited, made them to give the First Lady this prestigious award. Most of her initiatives feature majorly in their organization mission and vision for the African woman and youth.
“Having considered the positive impacts these programs have been creating in the lives of the women, youths and the less-privilege in your country which have made a number of them gainfully engaged and some now employers of labour, it is evident that you are worthy to be recognized and honoured as the winner for the Women/Girl-Child Empowerment Award .

As part of this year’s event, they plan to expand their activities to more African communities outside of the United Kingdom, and we will be honoring African leaders, such as Presidents, State Governors, and their wives, legislators, and other political office holders whose activities have helped to improve the African Youth/Girl-Child development and capacity building, Youths involvement in governance, which are consonant with their organization’s aims and objectives. 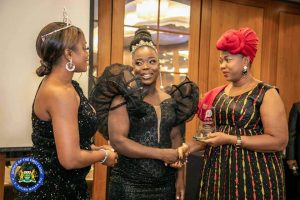