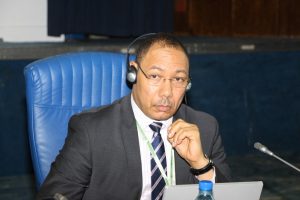 Edward Singhatey, a former vice-chairperson of the defunct AFPRC Government has today appeared before the TRRC voluntarily for the first time.

Singhatey is the third (3rd) member of the defunct junta to appear before the Truth, Reconciliation and Reparations Commission (TRRC). Sanna Sabally and Yankuba Touray have both appeared before the Commission, but Touray declined to give testimony relying on what he called his Constitutional immunity in the 1997 Constitution that happenings between the years 1994 to 1996 cannot be a subject of investigation or litigation.

Former President Jammeh was made the chairman of the established Armed Forces Provisional Ruling Council (AFPRC) and Sanna B. Sabally as the vice-chairman while Singhatey and others held ministerial posts. Six months after the coup, Singhatey acceded to the position of vice-chairman after the arrest of Sanna Sabally, who was accused of attempting to kill former President Jammeh.

Singhatey was the Minister of Defense before assuming the position as the vice chairman under their junta government. Singhatey also served under the APRC Government for years as a Minister before falling out with former President Jammeh, who decided to dismiss him from his position.