Finally Zack Orji is BACK! 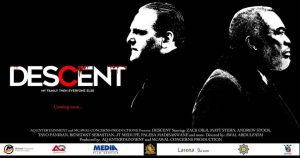 From the stables of AQ Entertainment and McAwal Concerns Productions comes first pan African film production entitled “Descent – My Family then Everyone Else”.

“Descent – My Family then Everyone Else” tells the story of family and what one would do to protect the ones they love and what they may do to the people who hurt the ones they love. It tells the story of Kalu Achebe (Zack Orji) an illegal arms dealer who lost his daughter to the recklessness of Vusi Morgan (JT Medupe) adopted son of Andrew Morgan (Matt Stern) a drug kingpin. Kalu Achebe seeks the heads of the culprits responsible for his daughter’s death though he blames the world for her sudden demise but someone needs to pay for the mistake of that single night.

In a recent encounter with the Director; Awal Abdulfatai he said “…the story narrated in the film is so compelling that you wouldn’t at any time be able to tell what might happen next. Each action has a reaction and the reactions so far are unpredictable. All I can say is that I am so excited to have worked on this project with the best team; my casts and crew”
The film which was shot on locations in Johannesburg, South Africa enjoyed a mixed race casting to tell the story of Africa. According to the producers “…we don’t want to produce this film as just a Nollywood product or just for the South African or Ghanaian film market rather an African film exportable to all African film markets and even to the rest of the world. If Hollywood films come down here to make Box-office success, why can’t our films also go there to do same?”
Descent is however scheduled to be premiered in some International film festivals cum 2017 and release to cinemas across Africa before it will be available for purchase on some digital platforms. The film is supported by the South Africa Police Service (SAPS), Ekurhuleni Municipality, Media Film Service, Larona HR Solutions and Lanrey Akins Fashion.
“…the interesting thing about this production is how it actually came together. The beautiful effort in the story, the amazing casts to interpret the lines and immense support and extra efforts of the people behind the cameras. What more satisfaction could you ask for?” – Chibuzor Nwankwo, Executive Producer Descent
The official trailer of the film is set for release by 23rd of August so we do believe that there is yet another blockbuster hitting African cinemas.