Gambia should learn from Nigeria’s success in democracy

Gambia should learn from Nigeria’s success in democracy 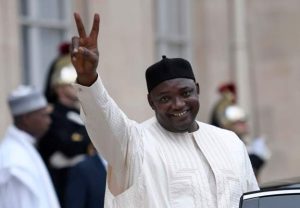 State House, Banjul, February 12, 2020 – His Excellency, President Adama Barrow has said that The Gambia should learn from Nigeria’s success in transitioning from military rule to a vibrant democracy through building of strong institutions and depoliticising the military.

The President made these remarks at the State House on Monday, when participants from Course 28 at the National Defence College in Abuja, Nigeria, paid a courtesy call on him.

The Course 28 group is on a research based mission in Banjul, on the theme: Tourism and National Development – Experiences of The Gambia.

For The Gambia, the Barrow government’s pursuit of the security sector reform includes the establishment of Ministry of Defence, which for the first time is operating independent of the Head of State and Commander in Chief of the Armed Forces.

The Gambian Leader said the diversity of the corps of participants in this apex military training institution for the Nigerian Armed Forces, reflects a steady approach to integration of the continent.

The Gambia’s Minister of Defence, Sheikh Omar Faye said the military support from Nigeria to The Gambia dates a long time. He lauded the recent intervention of the Federal Republic of Nigeria in resolving the Gambia’s political crisis in December 2016.

`Minister Faye said it is not just a policy of the government but also a personal principle of President Barrow to put peace and stability at the heart of Gambia’s national development endeavours.

Chief of Defence Staff, Lieutenant General Massaneh Kinteh reiterated that Nigeria’s transitioning from military rule to a vibrant democracy has become a reference point for governance. Such a lesson formed the basis for The Gambia Armed Forces’ policy of “keeping the Army out of politics and politics out of the Army.”

As a Centre of Excellence, the National Defence College brings together representatives from countries in the West, East, North and Southern Africa.