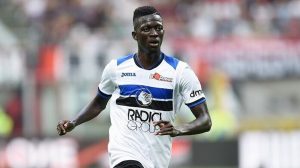 Musa Barrow could line up for Atalanta when they face Manchester City today.

One-time the hottest youngster in the European game, the Gambian striker has found himself down the pecking order with limited minutes coming his way even in the Italian Serie A.

However, he remains included in the Atalanta roster and possibly in contention for minutes either from the line up or as a last-gasp new entrant.

Atalanta are yet to pick a win in the Uefa Champions League, losing two of their last games against Ukraine’s Shaktar Donetsk and Croatia Premier League giants Dinamo Zagreb – a string of poor results for a side that wrapped up last season as the Italian Serie A’s best fourth outfit.

Realistically, not much resistance is expected from Barrow and co when they face English Premier League champions Guardiola’s Manchester City today at the Etihad Stadium at 7pm.

Musa is the sole Gambian in the European competition this term with the last being Momodou Ceesay in 2010 who spurred Slovakian minnows MSK Zilina to the tourney.

“We might not live up to the expectations of the electorate,” says Banjul Mayoress (Previous Post)
(Next Post) Three Nigerians injured in fresh xenophobic attacks in South Africa
Previous Image