“We might not live up to the expectations of the electorate,” says Banjul Mayoress

“We might not live up to the expectations of the electorate,” says Banjul Mayoress 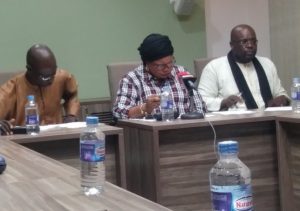 The Mayoress of Banjul City Council (BCC) has told the National Assembly Select Committee on Local Government and Lands yesterday that the council might not live to the expectations of the electorate.

She referred to a number of factors that she said, is hindering their efforts and aspirations.
“This hinders our efforts and aspirations to deliver the needed services to the populace and with the trend we might not leave up to the expectations of the electorate,” she lamented.
The interface brought together legislators and the council authorities led by the Mayoress of Banjul, to know the level of project implementation by the council, the challenges confronting them and charting the way forward.

It took the form of a question and answer session, during which members made queries on administrative matters, asking whether the council has project planning and policies, about the involvement of stakeholders in its planning processes, procurement and tendering procedures.

Officials of the council told lawmakers that the council has the aforesaid policies, as they go towards making life favourable to the residents; that the tendering process is mostly restrictive, targeting bidders in the country and that the council involves stakeholders in all its planning processes as important partners in development.

Mayoress Rohey Lowe, informed the committee that the council is faced with challenges, which include inadequate subvention from the government as stipulated in the Local Government Act, travelling clearance from the Lands Ministry, inaccessibility to the project document for ‘Banjul project’, the indebtedness of the council inherited from their predecessor amounting to over 16 million dalasi on gratuities and pensions and lack of procurement officer.

These are the factors the Mayoress said, are hindering their efforts and aspirations to deliver the needed services to the populace.

The council was asked whether they have a proper record keeping mechanism. In response, she highlighted the establishment of a records office, to keep accurate records of all staff.

She referred to the construction of a procurement office to be occupied by a procurement officer, the building of toilets for market vendors in Banjul, the on-going construction of the youth centre, employment and training of 45 security officers, which she said contributes to addressing youth unemployment, as some of the achievements registered by the council.
“Today the Banjul City Council owes no bank a butut. I have secured funding from the European Union in the tune of 3.1 million euros and am going to launch my Banjul Project that the community will feel ownership of”, she told the committee.

She added, “Currently, five of my Councilors are undergoing three months training in China and we also manage to send 40 trainers drawn from all the regions on training, as well as the construction of an abattoir and the documentation of a master plan for the Council”
Musa Amul Nyassi, the Chairperson of the Committee, said the engagement is a follow up to the previous efforts made to know the level of implementation of the activities of BCC, successes attained and challenges confronting them and chart the way forward, with the objective of ensuring service delivery to the people.

Posted in Featured News | Comments Off on “We might not live up to the expectations of the electorate,” says Banjul Mayoress
Tags: Gambia news, latest Gambia news