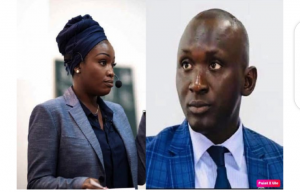 Afrinity Production notify you of the denial of The government of The Gambia on working with Lovette Jallow or her NGO, Action for Humanity, to repatriate 36 stranded Gambian women in Lebanon

According to Standard, Madame Jallow appeared in a live Instagram video last week in which she reported that the Gambia government, having initially rejected her help to bring back the women, now wants to work with, collaborate and accept her help in the repatriation.

Standard firuther said, Madame Jallow said she has paid D2.3 million to help repatriate what is now more than 40 Gambian women stranded in the Lebanese capital, Beirut. She added that a total payment of D3 million will be made to finish the mission, which include the paying of lawyer’s fees and communications, as well as the women’s upkeep and tests for Covid-19.

However, the foreign affairs ministry said contrary to what Madame Jallow has made Gambian people to believe, they are in fact not collaborating with her.

“The Government of The Gambia is neither working with her nor working against her,” spokesperson Saikou Ceesay told The Standard. He refused to give any further details.

Responding to the ministry’s statement, Madame Jallow told The Standard: “This is not a game of winning or losing and I think it is wise if we have the same interests. That was the intention [of my assistance].”

She said the Gambia government together with its consulate in Lebanon facilitated and released the documents of the girls’ “and I paid the tickets for their return”.

But the untold story according to standard is:

The Standard has learnt that most of the women in Lebanon have minor issues with the law. “That is why it was difficult to just have them repatriated. There were a lot of issues that government had to deal with first,” a government source told The Standard.