In today’s Afrinity connect interview. You are about to find out more about one of the most prominent Gambian actresses Monica Davies. 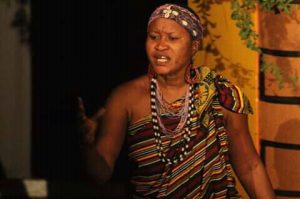 Who is Monica Davies?

Monica Davies is a Gambian Actress both on Stage and Screen. The strong Passion she have towards acting gave her the confidence to explore the industry.

She is currently working with an Organisation as Acting doesn’t pay much to cater for her needs, now she is a part-time actress after her office working hours.

“Most Producers or Film Directors that I have been working with understand the nature of my job and I do explain the same to any other person that needs my services. I also make sure that not to accept scripts whose filming schedule might clash with another as putting a production on hold is the last thing I will ever do in my professional career” said Monica.

Monica is from an average humble Family of 8. She studied Office Administration and later proceed to do a 2years course in Sales and Marketing Management at the University of The Gambia in Collaboration with LCM.

In 2015, she got admission to study Public Administration but later deferred her course because her sponsorer stopped and after applying for scholarship through the Higher Education was unsuccessful.

Monica Davies received few awards in the cause of her career; Best Female Actress in The Gambia – 2012, Pan African Most Promising Actress 2015 which was held in Ghana, Leadership Recognition Awards 2016 by Leadership Mind Ambassadors in Nigeria and Best Actress 2018 -Special Movie Awards (SMA) and other Recognition certificates by Production houses.

Describe a real-life situation that inspired you?

Monica was inspired to act after the death of her Father when she was just 17 years old and was in a situation that was frustrating. Having the strength to come out of that situation with the Grace of God pushed her to never give up in pursuing what she believe in life.

Why does Monica Davies Choose acting?

According to her, she have always been passionate about acting back in school. The love for Literature and dramas in those books she read deepen her love for the act and that was why in 2003 when she came across an Audition advert by Vinasha Film Production on the Gambia Daily Observer, she grabbed the opportunity and successfully got a role in one of their TV series “BANJUL COPs”.

Since then she have never looked back and later started stage acting in 2012 with GAMYAA and Pan African Theatre and Films Production before joining the Renowned and ONLY Professional and Standard Theatre in The Gambia ‘The Ebunjan Theatre’ in 2013 where she learnt and experienced Professional Stage Acting and has done several stage performances of plays written by the Phenemonal Proprietess/Director Janet Badjan-Young and other international Playwrights.

When asked to name three actors she do like to be compared to, she said “Nollywood Patience Ozokwor (Mama Gee) because of her strict or hard character or roles and mother roles she plays. Stella Damasus and Nkiru Sylvanus- They versatile actresses and when they are to play an emotional role they play it so well that they get their audience carried along.”

Monica’s professional goals is to always bring humility and Authenticity to any role she is interpreting and to be truthful ad professional in improving her skills.

She further make known of what she can’t do without, which includes her Rosary and her phone which has her off Line Bible and novels that she can read at anytime and place.

Posted in Featured News | Comments Off on In today’s Afrinity connect interview. You are about to find out more about one of the most prominent Gambian actresses Monica Davies.
Tags: Monica Davies