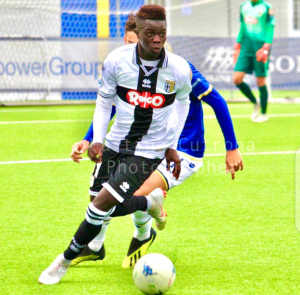 Dunga was born and raised in New Jeswang and he is 20 years old.

He has always dream of becoming a professional footballer back in his childhood as football makes him happy.

In 2015, Dunga becomes one of the players to participate in the selection made by Italian agents in sponsoring footballers from the Gambia.

The selection took place in Banjul at KD five and he was the luckiest chosen by the Italian couches. According to Dunga, the tries were made by the Italian Scouts to select the best.

The 20 year old Gambian talent played for well-known teams like Sammaurese, San Marino and Parma. Scoring about 11 goals and 7 assist.

Dunga is about to join his 4th team in the soccer game. His decision was one that certainly took a while for him to thoroughly consider taking a stand.

It became even more difficult when he just decided to keep it low and made a late approach to sign for another team after his impressive showings over his pass winning stage. But the Gambian talent surely decided it was best to leave to another team and take on the new challenge of playing there.

Dunga is not revealing the name his present team at the moment, but he promise to notify us after his first match.

He made mention of becoming rich is not his motive, football just makes him happy and makes him feel at a safer place.

His dream is to one day play for Gambia and make his country proud.