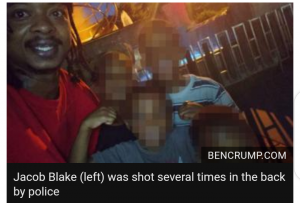 Afrinity Production make know to you the shooting of another black man by police in the US city of Kenosha.

According to what Kenosha County Sheriff David Beth told the New York Times that one person had been killed.

The violence occurred during a confrontation between protesters and a group of armed men, the newspaper said.

Unrest broke out in Kenosha after Jacob Blake was shot by police on Sunday.

Within hours of Mr Blake’s shooting, hundreds of people had marched on Kenosha’s police headquarters. Cars were later set alight, and police urged 24-hour businesses to consider closing because of “numerous” calls about armed robberies and shots being fired.

On Tuesday hundreds of protesters marched through the city. A small group threw fireworks and water bottles at police, who responded with rubber bullets and tear gas.

Protests have also spread to a number of other cities, including Portland, Oregon and Minneapolis, Minnesota.

Lawyer Ben Crump told a press conference on Tuesday that doctors said Mr Blake had been paralysed by the shooting.

“His family believe in miracles, but the medical diagnosis right now is that he is paralysed and, because those bullets severed his spinal cord and shattered some of his vertebrae, it is going to take a miracle for Jacob Blake Jr to ever walk again,” he said.

Posted in Featured News | Comments Off on Jacob Blake and two shot during third night of Wisconsin unrest.