Lesotho's Thomas Thabane to be charged with murdering his wife

Lesotho’s Thomas Thabane to be charged with murdering his wife 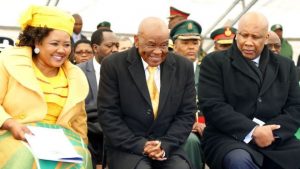 Lesotho’s Prime Minister Thomas Thabane, 80, is to be charged with the murder of his estranged wife Lipolelo Thabane, police have said.

Mr Thabane announced he would be stepping down in July because of old age, without commenting about the case.

His current wife Maesaiah Thabane has already been charged with the murder.

He would be the first leader in southern Africa to be charged with murder while in office, in a case that has shocked the tiny mountain kingdom.

At the time, he described her killing as “senseless” but police now accuse him of being involved in her killing.

“The prime minister is going to be charged with the murder,” Deputy Commissioner of Police Paseka Mokete was quoted by Reuters news agency as saying.

“The police are preparing directives and he will probably be charged tomorrow [Friday],” he added.

Lipolelo was gunned down at close range on the side of a dirt road while returning to her home in a small village on the outskirts of the capital, Maseru.,

At the time, the prime minister was living with Maesaiah, 42, as if she was his wife.

But Lipolelo had already won a separate legal battle to be recognised as first lady, as opposed to Maesaiah.

Two months later she and Mr Thabane got married in a Catholic ceremony held at a packed stadium in Maseru.

Maesaiah was charged with her rival’s murder on 5 February, and is out on bail.

She has not yet been asked to plead to the charge.

Posted in Featured News | Comments Off on Lesotho’s Thomas Thabane to be charged with murdering his wife
Tags: Southern Africa News