Acid attack survivor: 'There are more good people than bad'

Acid attack survivor: ‘There are more good people than bad’ 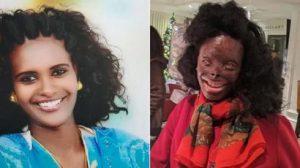 An Ethiopian woman disfigured after her estranged husband attacked her with acid in 2017 says that despite her suffering she has reasons to be thankful.

“There are more good people in the world than there are bad people,” Atsede Nguse said on the phone from her new home in the US.

“I have been touched by the kindness and love people showed me after the incident,” the 29-year-old mother of one said.

The acid poured over her destroyed her face and burned through her body.

When they learned what had happened, friends and well-wishers raised money to pay for treatment in Thailand.

But that money ran out before Ms Atsede was properly healed and she had to return home.

Then, for a second time, someone came to her assistance.

Menbere Aklilu, an Ethiopian women’s rights activist based in the US, read about what had happened to Ms Atsede on Facebook.

As a survivor of domestic violence herself, she said she wanted to help.

“When I read her story, I felt sorry like everyone else. But when I knew she was a mother, I thought: ‘What if my son was in her son’s place?’

“This really touched my heart.”

Acid Survivors Trust International, a UK-based non-governmental organisation, estimates that between 50 and 75 women are attacked with acid in Ethiopia every year.

This figure fits into a larger pattern of domestic violence.

A 2016 Ethiopian government study said that more than a third of adult women who were or had been in a relationship had been the victims of physical, sexual or emotional violence at the hands of their partner.

The attack on Ms Atsede can be seen in this context.

Her husband, whom she married in 2012, would beat her over minor disagreements.

“Our neighbours were worried, and said he may kill me some day. Despite it all, I continued to live with him for the sake of my child. I didn’t want him to grow up without a father, as I did.”

Posted in Featured News | Comments Off on Acid attack survivor: ‘There are more good people than bad’
Tags: Ethiopia news