Makinde To Adesina: You Are A Pride To Nigeria, Yoruba Race 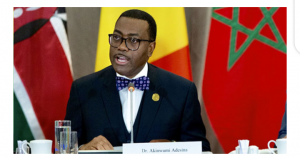 Afrinity Production brings to you the congratulation message of Oyo State Governor, Seyi Makinde, to the President of the African Development Bank, Dr. Akinwumi Adesina, following his re-election for another five-year term.

In a statement issued by his Chief Press Secretary, Taiwo Adisa, Governor Makinde said that the victory was well-deserved adding that the ‘world class technocrat’, remains a pride to Nigeria and the Yoruba race.

To Makinde, Adesina has raised the standards and brought about immense growth in the multilateral development finance institution, in the last five years of his first tenure.

The governor said he was not surprised that Adesina was re-elected to lead the bank for another term.

While describing his leadership as insightful, Makinde said Adesina “could not have gone unnoticed by stakeholders and member-countries.”

“The victory is well-deserved, and it did not come to me as a surprise, because Dr. Adesina’s astute and visionary leadership at the bank, in the last five years, have been so convincing that member-countries cannot ignore them,” the governor was quoted as saying.

“This victory, I am convinced, is a platform for Dr. Adesina and the AfDB to achieve more positive results and meet set targets. I wish him well in his endeavours.”

Posted in Featured News | Comments Off on Makinde To Adesina: You Are A Pride To Nigeria, Yoruba Race