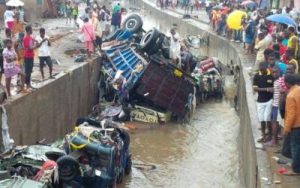 At least 28 people have been killed and several others injured following eight days of torrential rains in north-eastern Ghana.

More than 1,000 houses have been destroyed and several people have been displaced.

“The latest situational report indicates that 28 people have lost their lives in the Upper East region of the republic of Ghana. The rains are still ongoing. We have about 140 people displaced,” the agency’s spokesman George Ayisi said on Wednesday.

The displaced people are sheltering in churches and schools.

Ghana’s meteorological department has predicted more rains across the country in the coming weeks and has warned of the possibility of more flooding.

Relief organisations have appealed for more support for those affected.

Posted in Featured News | Comments Off on More than 20 killed in Ghana floods
Tags: ghana news