My Goal Is To Win World Cup With Argentina – Messi 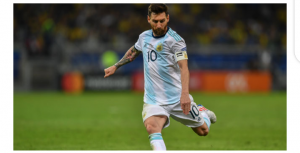 Afrinity Production draw attention to Superstar footballer Lionel Messi who will be taken a break from his Barcelona soap opera as he bids to fire Argentina to the World Cup in Qatar and what will probably be his last chance to try to win the coveted trophy.

The 33-year-old, a record six-time winner of the Ballon d’Or, has won everything in the club game with Barcelona several times over but his international trophy cabinet looks bare in comparison.

“The only goal I have now is to win the World Cup with the national team,” he has said.

He will be 35 by the time the Qatar World Cup ends, and will turn 39 during the following global showpiece in North America.

In the meantime, he has a pair of qualifiers — Argentina also travel to Bolivia next Tuesday — to distract him from his club travails.