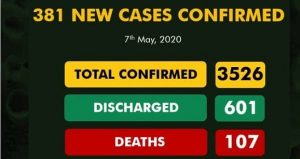 Nigeria has confirmed 381 new cases of the coronavirus, bringing the Toll of the country’s infections to 3,526.

The Nigeria Center for Disease Control(NCDC), confirmed this in a tweet on Thursday. This happen to be the highest number of cases confirmed in a single day in the country.

11 are in Katsina, nine in Borno, eight in Kwara, seven in Kaduna, six in Gombe, five in Ogun, four in Sokoto, three in Oyo and in Rivers, two in Niger and one each in Akwa-Ibom, Enugu and Plateau states.

The recent figures come amidst distress about the level of conformity with the steps put forward by the Federal Government for easing the lockdown in Lagos, Ogun and the Federal Capital Territory.

‘Barrow Must Not Drag Feet On Constitution’ (Previous Post)
(Next Post) Sweden Confirms Not Less Than 3,000 Coronavirus Deaths
Previous Image