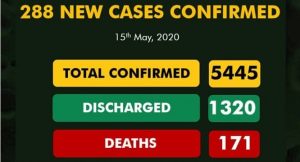 Nigeria has recorded 288 new cases of the novel coronavirus, according to the Nigeria Centre for Disease Control.

In a tweet via its official handle late Friday, the NCDC said 179 new cases had been discovered in Lagos, the country’s hotspot.

In Kaduna, 20 new cases were recorded, 15 each in both Katsina and Jigawa, 13 in Borno, 11 in Ogun, eight in Kano, seven in the FCT, four each in Niger and Ekiti, three each in Oyo, Delta and Bauchi, two in Kwara and one in Edo.

The health agency also noted that the number of recovered cases had jumped from 1,180 on Thursday to 1,320, while the death toll increased by four to 171.