One of The Greatest Bulwarks Of liberty, Journalists Like Sainey, Should Be Portrayed In Heroic Style!!! 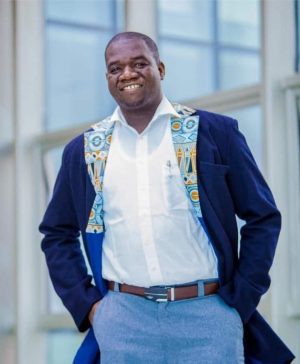 Afrinity Productiion draw cognizance to Sainey MK Marenah, a 34 year old Gambian Journalist and Communications Consultant with close to 15 years experience in journalism, communications and activism. Hails from Kudang in the southern Central River Region of The Gambia, famously popular for producing one of our country’s finest men and women in the public and private sector.

When he began working as a journalist in 2007, with the point newspaper, the media was operating in difficult circumstances. Free speech was curtailed. The government treated the media as an enemy, not a partner in open governance. Restrictive laws were enacted.
Journalists who dared voice any opposition or criticism of the government paid a high price. Several went into exile; including himself while some were killed and others simply disappeared, even as many more faced prosecution on spurious charges.

Sainey was a correspondent for The Point, an independent daily based in the capital Banjul, where he reported on political, legal and diplomatic affairs. He became accustomed to frequent harassment by state agents. In August 2010, he was summoned to appear before a high court judge in Banjul. The judge questioned him about his story on the trial of former police chief Ensa Badjie who was accused of corruption and robbery by the ex-president Jammeh. The story quoted the defence counsel complaining during the hearing that his client had been tortured. The judge insisted that their headline was wrong.
When it was pointed out to him that two other newspapers had carried the same quotes, he had no choice but to let him go.

For slightly over a year, until Sainey’s arrest in January 2014, at that time he was a senior correspondent for The Standard, a privately owned newspaper which had a bumpy ride and suffered frequent closure for its journalism.

As chief correspondent, Sainey headed the political desk of The Standard, leading investigations into major national stories. He started off as a judicial reporter, mainly covering the courts, which were kept busy by the frequent prosecution of critics of the regime. Officers of the National Intelligence Agency (NIA), they even visited their offices in 2012 and announced that the president had ordered the newspaper’s immediate closure. No explanation was given. The order came when there was a national debate about the execution of nine prisoners.

The Standard had provided extensive coverage of the executions and criticised the action. NIA agents denied Mr. marenah’s access to the Supreme Court during during the hearing of the final appeal against the death sentence imposed on a former chief of defence staff and six others convicted of plotting to topple Jammeh.

“I had covered the trial since its start in 2009 until my newspaper’s closure. The intelligence operatives claimed they were acting on orders from the presidency. The arbitrary closure and interference left many journalists jobless. I resorted to freelance writing for several newspapers, including The Voice, a private tri-weekly newspaper. It was not long before I was in trouble again, this time over a story about the defection of 19 Green Youth members from the ruling APRC party. I had attended a rally at Tanji, a coastal town in The Gambia’s south, about 25 km from the capital, where several youths publicly announced their defection to the opposition United Democratic Party (UDP). The Green Youth were die-hard supporters of the ruling party and were viewed as militant — who supported President Jammeh at all costs. This is why the opposition’s youth secretary, Solo Sandeng, furtively gave me the defectors’ names. My attempts to interview some of them failed because they feared reprisals from the ruling party”, he explained.

On 14 November 2014, Marenah fled to Senegal. The first few months in Dakar were difficult. He did not know anybody and was unable to work. With the help of media support and exposure, he started a new life doubling as a freelance journalist for international media, including the BBC and Al Jazeera.

In 2017, after the defeat of long time ruler, Yayha Jammeh by current President Adama Barrow, he happily returned to Gambia where he continued practicing journalism. He worked with GRTS as a social media strategist and editor before picking up his next job as head of media and communications with the Constitutional Review Commission in 2018.
The commission was tasked with drafting a new Constitution where he was responsible for communications and media outreach campaigns in his role as the Spokesperson of the CRC.

In 2008, Journalist Sainey was awarded an International Monetary Fund Journalism fellowship and became the first Gambian to be selected for the prestigious fellowship allowing him to travel to Washington DC where he joined 18 other journalists across the world.

He also worked with Gamworks under its New project, Gambia Pilot Program as Communications Consultant. He Co-Founded the Media Centre for Research and Development in 2017 with his dear friend and long time colleague, Ebrima Jatta offering media and communications consultancy to local and international organizations.

In 2020, he also co-authored a book: ‘ Hounded: African Journalists in Exile with 15 other African Journalists. The book was published and he thank the KAS Media Programme for Sub saharan Africa and a german think tank based in South Africa for their support.

His passion for journalism dates back to his early days as a student leader in Armitage High School where he was a member of their Current Affairs Club, writing and editing for the school magazine. And also of his passion to bring stories of the most disadvantaged people in society like rural children to the forefront.

Above all, Mr. Marenah said his journey is not much different from many other children growing in rural Gambia. He grewup with access to very limited resources and he had to struggle hard to be in school and pass his exams. His success today is an epitome of the commitment, dedication and hard work he put up throughout his career.

When asked what he can’t do without, he said Justice, anytime he sees injustice, he must speak against it even if it goes against the majority.

His source of inspiration comes from his late parents. They taught him to be very humble and hardworking.

Mr. Marenah was also inspired by the bravery of assassinated Gambian Journalist, Deyda Hydara a journalist whose desire is to hold the powerful accountable as well as bring the stories of the most disadvantaged to the limelight.

Sainey is currently in the United States working as a media consultant and about to start his degree program in media and communication studies at University of Washington in Seattle, Washington State.

In 5 years to come, he sees himself as an improved person, in his professional and also as a social advocate with a keen passion to become a media owner in the very short term during and after his degree programme.

Posted in Featured News | Comments Off on One of The Greatest Bulwarks Of liberty, Journalists Like Sainey, Should Be Portrayed In Heroic Style!!!

Afrinity Production Star Of The Week (Previous Post)
(Next Post) Taf africa global is launching competition for the design of our new affordable houses.
Previous Image