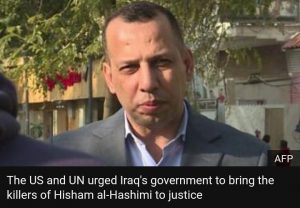 A paramount Iraqi expert on jihadist and other armed groups has been shot dead in the capital, Baghdad.

Hisham al-Hashimi, 47, was killed near his home in the Ziyouna district yesterday night by two gunmen who were riding a motorbike, according to the police report.

No t none which group us behind the killing, but he had reportedly received threats from Iran-backed militias.

“We vow to his killers that we will pursue them so they are justly punished. We will not allow assassinations to return to Iraq for a single second,” a statement said.

The US embassy in Baghdad said in a Facebook post that it was “deeply shocked and saddened by the cowardly murder”.

“Our deepest condolences to his family and to the people of Iraq for the tragic loss of this Iraqi national treasure. We call on the Iraqi government to bring those responsible for his murder to swift justice.”

“We strongly condemn this despicable act of cowardice,” a statement said.