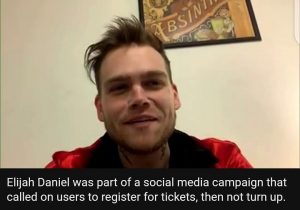 President Donald Trump’s re-election team has turned down allegations that a social media campaign by Tik-Tok users and K-Pop fans was behind the lower-than-expected turnout for Saturday night’s Oklahoma rally.

Teenagers are said to have booked for their tickets without any intention of attending Trump’s rally just too produce empty seats.

The Trump 2020 team said one million requests had been made for tickets.

But it insisted that it had weeded out bogus reservations.

The Bank of Oklahoma Center venue in Tulsa seats 19,000. The event was also planned to extend outside, though that part of it was cancelled.

The Tulsa fire brigade is quoted as saying more than 6,000 attended, but the 2020 campaign suggested the figure was much higher.

The team’s campaign director said in a statement that “phony ticket requests never factor into our thinking” as entry to rallies is on a first-come first-served basis. Brad Parscale blamed the media and protesters for dissuading families from attending.

“Registering for a rally means you’ve RSVPed [confirmed attendance] with a cellphone number and we constantly weed out bogus numbers, as we did with tens of thousands at the Tulsa rally, in calculating our possible attendee pool.”