Sabally Is The Winner In The Field Of Hard Work And steadiness!!! 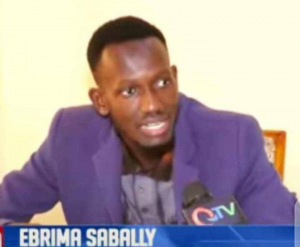 Afrinity Production draw attention to Ebrima Sabally, a skilled driven and an enterprising young star that was born and raised in Kiang Kwinella where he did first quarter of his education before proceeding to Senior Secondary, College and University.

Sabally reads Development Studies from the University of The Gambia; and a primary Teacher Certificate at The Gambia College. He currently serves as Business Development Service Supervisor for West Coast Region on West Africa Competitiveness Programmed, a project funded by EU to boost value chain in onion, pepper and tomato production in West Africa.

He further serves as the Head of State of Youth in Africa, The Gambia Chapter. Additionally, from 2018 to date, he serves as Policy Adviser to United Nations Girls’ Initiative (UNGEI) which is a body that works and collaborates with over 300 organizations across the world; to lead and organize campaign on Gender based violence and its related issues in schools, communities and countries across the world.

Sabally was an intern at the American Corner The Gambia, Program Officer atSalimatou Foundation for Education (SaFE) from 2020 to present, Enumerator/Assistant Supervisor
Gambia Social Registry Survey and he also served as a Classroom Teacherfrom 2016 to 2019 at Old Jeshwang.

Mr. Sabally, over the years, designed and implemented ample of programs under dynamic institutions and internationally recognized bodies such US Embassy, the Gambia. In 2019, Sabally and Salimatou Fatty coordinated a Youth Empowerment and Career Development project in North Bank Region, The Gambia. A project funded by US Embassy through its Alumni Association. Further, Sabally trained youth in their number in different platforms on communicative competence and an application of critical reasoning in an argument. Similarly, he trained and mentored young people on diverse thematic areas related to personal leadership, growth and self-transcendence.

In 2017, Sabally won National Competition on Policy and Proposal debate on Climate Change; and was decorated with National Certificate of merits for his contribution to the National Development by the government of The Gambia, National Youth Council and the Balance Crew. In the same year, he served Social Sciences and Humanities Students’ Association (SoSHSA), and School of Arts and Sciences Nationwide Teaching and Sensitization Tour as Secretary General. On a separate paradigm, Sabally, participated and served as team leader in numerous socioeconomic and academic surveys, including Nfamara K. Dampha’s PhD Research on Coastal Ecosystem Service Valuation and Climate Change Adaptation; and a Survey on Willingness to Pay for Maintenance Fees for a newly built community-funded water (borehole) infrastructure project in Geniere Village. In addition, Mr. Sabally published numerous articles and over a hundred quotations on leadership, self-esteem, unity, law, development and among others.

Sabally is among the first, if not the first Gambian youth to start designing his inspiring write-ups in a form quotation. This, today, has gained immense takeoff, as we have seem good number of young writers spreading their thoughts through quotations.

As an innovative, resourceful and forward-driving youth that embraced true love for The Gambia and trust that he can always make it here in The Gambia; Sabally recently opened a business named “Gam-Taste”. Which is a Restaurant and Catering Service that produces and sells Gambian food and beverages. The business within three weeks has registered tremendous takeoff, directly employing six Gambians. With the business, he intends to grow into a complex company that will manufacture raw materials (food) into finish products for The Gambian population and beyond.

Posted in Featured News | Comments Off on Sabally Is The Winner In The Field Of Hard Work And steadiness!!!

Afrinity Production Top 5 Movies Of The Week (Previous Post)
(Next Post) One of the richest American actresses Tiffany Haddish has said she is ready to be a mother now.
Previous Image