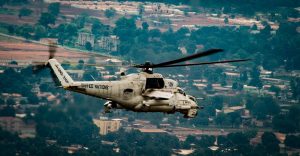 UNITED NATIONS, Sept. 27 (Xinhua) — Three Senegalese UN peacekeeping crew members were killed and the fourth one injured in the crash of an Mi-24 helicopter in the Central African Republic (CAR) on Friday, a UN spokesperson said.

The helicopter was attempting an emergency landing due to bad weather conditions in Bouar west of the Central African Republic. said Stephane Dujarric.

The helicopter was providing air support to a security operation by the UN mission against an armed group in the Nana-Mambere prefecture, Dujarric said.

“The secretary-general, and the United Nations, extend their heartfelt condolences to the families of the fallen peacekeepers, as well as to the government and people of Senegal,” the spokesman said.

“It is with immense sorrow that I have learned of the crash of a Senegalese combat helicopter as it was landing at Bouar, leading to three deaths and one injured,” the head of the MINUSCA mission, Mankeur Ndiaye, said on Twitter.